A surveillance camera in Bakersfield, California, caught on tape a woman dragging a little dog behind her electric scooter. The scooter was moving at around 15mph and the dog clearly couldn’t keep up with the pace, so he was just being dragged while lying on his side. The woman on the scooter was identified as 39-year-old Elaine Rosa.

According to the two cyclists that stopped her, Rosa dragged the dog for at least a hundred yards before they saw her. When they confronted her, she just said “Sh*t happens, just like with kids”. Rosa then picked the dog up and proceeded to walk to her apartment. Sanders and his companion followed the woman back to her apartment while calling the police, and the woman threatened to call the cops on them for harassing her.

James Dowell, the owner of the CCTV shared the video on Facebook, and it quickly went viral. Brandon Sanders, one of the two cyclists, reported the incident to the Bakersfield Police Department and charges were filed against her for animal abuse and neglect.

After pleading not guilty during her first hearing back in March, she was scheduled to go to court on May 29, but the hearing has been postponed to July. If found guilty, Rosa could face a total of 3-year jail time and a $20,000 fine. In the meantime, she lost her job as a contracted psychologist at Kern Valley State Prison.

Later it was revealed that the dog’s name is Zebra, and Rosa is not his owner. The dog was picked up by the Animal Control Services, has been treated and cared for his injuries and will get well soon.

A woman in her late 30s was caught on video dragging a dog behind her electric shooter at around 15mph. 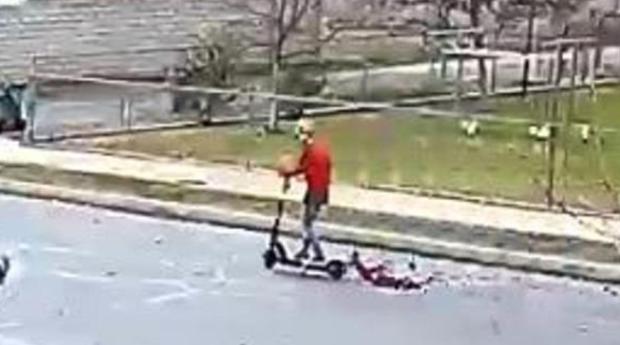 The woman has been identified as 39-year-old Elaine Rosa from Bakersfield, California. A contracted psychologist working at the Kern Valley State Prison.

A witness stopped Elaine Rosa and confronted her and she only responded that “Sh*t happens, just like with kids”. She then abandoned the scooter and picked up the dog, getting his blood all over her sweater. The dog was obviously wounded after being dragged on the road, with his paws covered in blood.

The witnesses reported the event and Rosa is now facing charges for animal abuse and neglect. The footage has been posted online, sparking a strong reaction from people on social media. (Warning: graphic content)