We’ve all had our “oops” moments in life – perhaps you forgot to turn the water off before leaving the house, bought a pair of shoes online that turned out to be doll shoes, called someone the wrong name for way too long or accidentally spent a month using fabric softener instead of detergent.

But there are “oops” moments and then there are “OOPS” moments and Florencia Lobo definitely had the latter when a trip to the vet revealed something surprising about the kitten she’d recently adopted.

The little cat she’d rescued after finding its mother dead was not a stray, as she had thought, but was actually a puma. OOPS indeed… 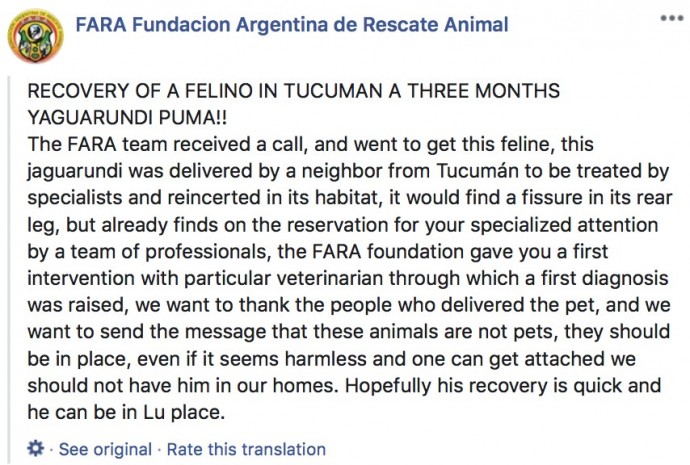 It all started when Lobo and her brother discovered two kittens by the side of the road in Tucuman, Argentina.

The two kittens were cuddled up next to their dead mother, and Lobo and her brother assumed that they’d found a family of stray domesticated cats.

Lobo decided to try to save the kittens and brought the pair home with her.

The kittens were very young and very weak, and unfortunately one of them ended up passing away.

With both his mother and his sister now gone, the remaining kitten was all alone in the world.

That is except for Lobo, who was determined to keep the little cat safe, healthy and loved.

She named him “Tito”, and under Lobo’s loving care, the adorable little cat grew stronger each day.

Thanks to Lobo, Tito was able to survive and thrive despite losing his mother at such a young age.

Lobo did everything she could to keep her new furbaby in good health, and after Tito had lived with her for about two months, she scheduled a vet appointment for him.

There was nothing noticeably wrong with the kitten, but Lobo though it would be wise to get him checked out just to make sure that he didn’t have any hidden or underlying issues.

But Lobo was in for a big surprise.

When she took Tito to the vet, the vet told her that Tito wasn’t a normal house cat.

The vet then put her in contact with a local nature reserve, who could confirm what the vet had suspected; Tito wasn’t a kitten, he was a cub. A puma cub, to be exact.

This was obviously shocking news to Lobo, who’d loved and nurtured the little cub for weeks.

But even though Jaguarundi pumas only grow to be slightly larger than a “normal” cat, they are still wild animals and belong in nature.

And so, little Tito was invited to move into the reserve, and trade his housecat days for a life in the wild.

Tito is being well looked after by the nature reserve staff and will be able to thrive and live a long and happy life in his natural habitat.

Though Lobo made a mistake when she assumed Tito was a kitten, it was a very lucky mistake.

Because whether kitten or cub, Tito is alive today thanks to her love and care.

If Lobo and her brother hadn’t found him, the poor cub would not have lasted long.

Now, Tito has a wonderful life ahead of him, and Lobo has a great story to tell.

Naturally, this dramatic tale has caused more than a few reactions.