Here we are again talking about the amazing that make our planet so incredible. This time we put the accent on those places that not only are utterly beautiful, but also surreal. Places whose aesthetic goes beyond the human knowledge, where colors are not what they should be (like in the pink lake in Senegal) or the rock formations form shapes that you can see nowhere else (like in the Wave in Arizona). Keep your eyes wide open because the world is just more beautiful than you thought it was.

If you didn’t already, take a look at more amazing places we talked about here and here.

Salar de Uyuni or Salar de Tunupa is the world’s largest salt flat occupying the area of about 10,582 square kilometers. Today’s Salar is a result of transformations between several prehistoric lakes. Its surface is covered by a few meters of salt crust possessing the utmost flatness, which varies within one meter over the entire area. Actually, the crust serves as a source of salt and makes a pool of brine, rich in lithium as well. 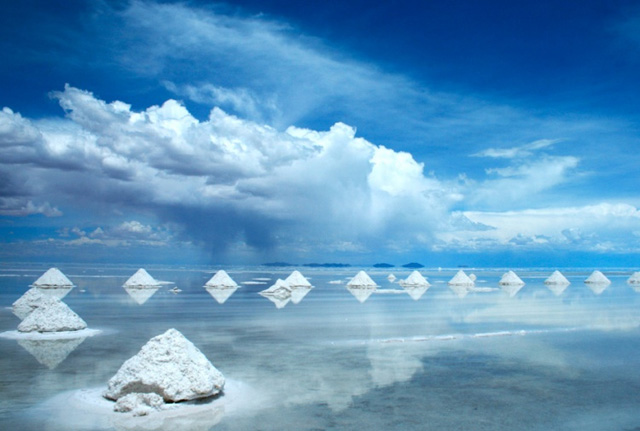 This lake’s hue is given by its extremely high evaporation rates. During the dry season, as the water evaporates, salinity level increases to the maximum point and specific salt-loving microorganisms begin to thrive. Some of them produce red pigment colorizing the water and turning it into the Martian landscape. 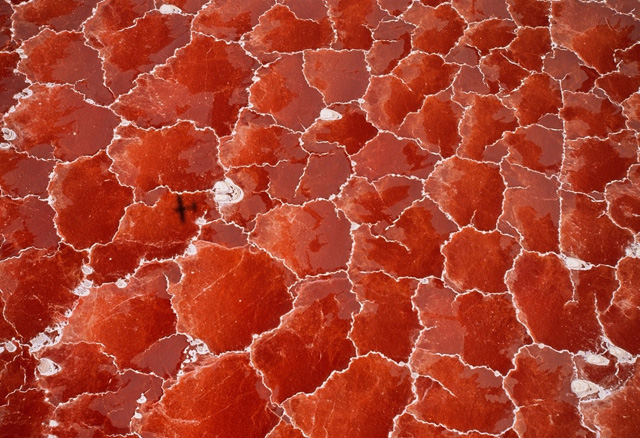 The Wave is a sandstone rock formation in the United States of America near the Arizona and Utah border on the Coyote Buttes slopes. Travelers and photographers from all over the world are attracted by its colorful, wavelike forms. The Wave’s intersecting U-shaped troughs are the result of erosion of the Navajo Sandstone during the Jurassic period. 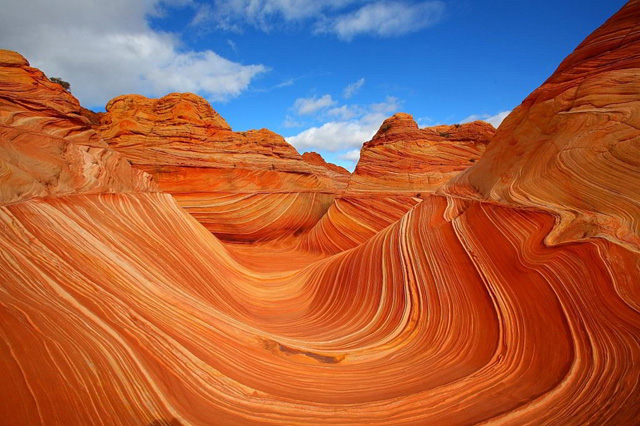 Lake Retba is located in the north of the Cap Vert peninsula of Senegal. It got its name due to the Dunaliella salina algae making its water look like strawberry milk shake. Pink color is clearly visible during the dry season. 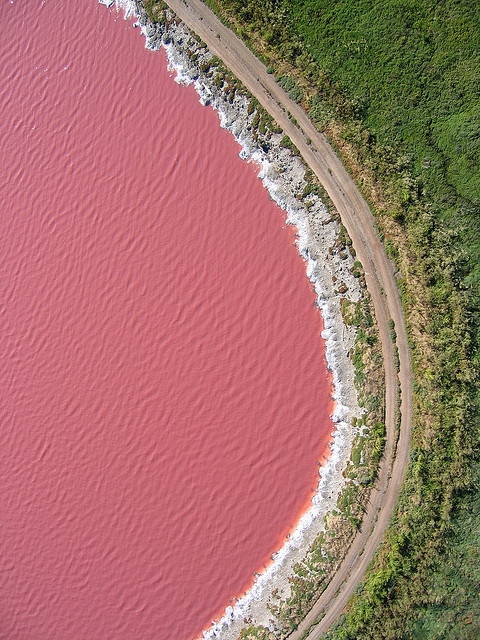 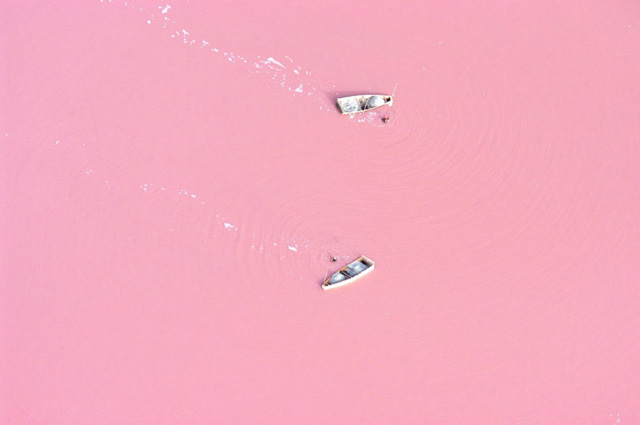 Five-Color Pond is one of the smallest but the most amazing water basins in Jiuzhaigou lakes. It has a breathtaking colored underwater landscape and some of the brightest and clearest waters in the area. 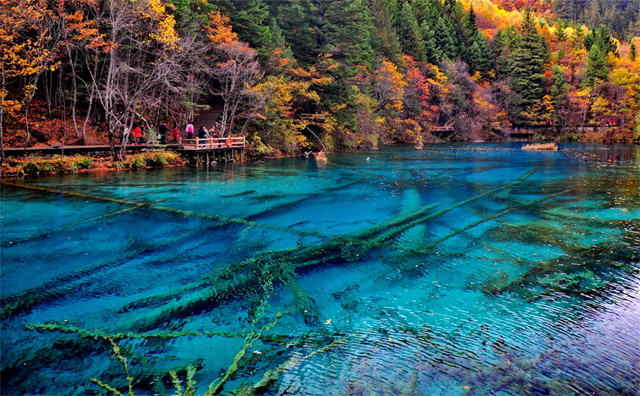 These waves in Antarctica are the result of melting, not freezing. This has created those downward pointing spikes, which are simple icicles. 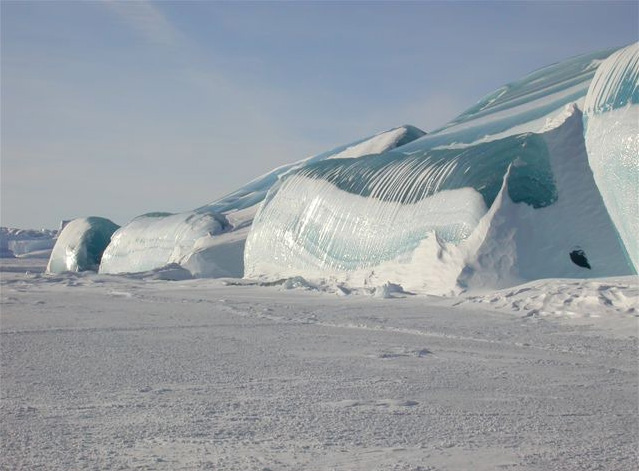 Yueyaquan is a crescent-shaped lake in the oasis, lying 6 km south of the city of Dunhuang. 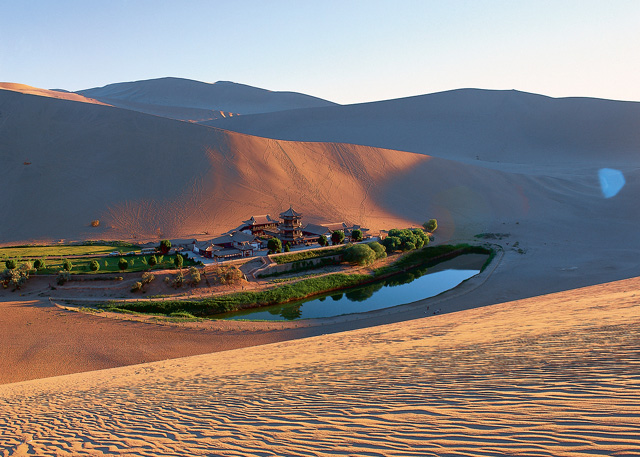 This is the highest mountain of the Pakaraima chain of tepui plateau in South America. The mountain touches the borders of Venezuela and Brazil. The mountain’s highest point is 2810 m high. 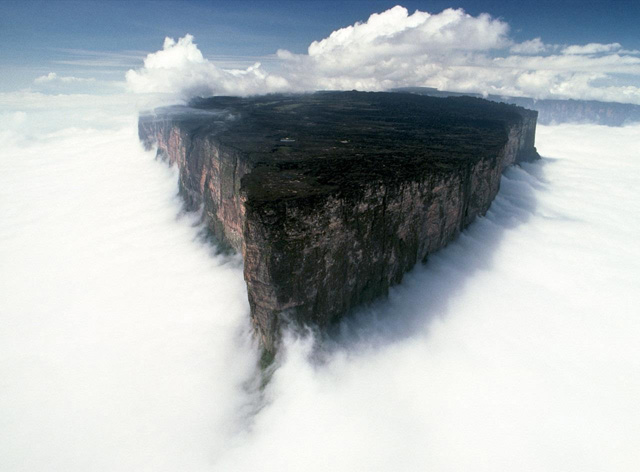 Fly Geyser is located on the territory of a private Fly Ranch which makes the access extremely difficult. This geyser casually created during well drilling. The well went out of order after several decades of operation as warm geothermal water has found a weak spot and began to leak onto the surface. Dissolved minerals started their sculptor job, which is still going on. 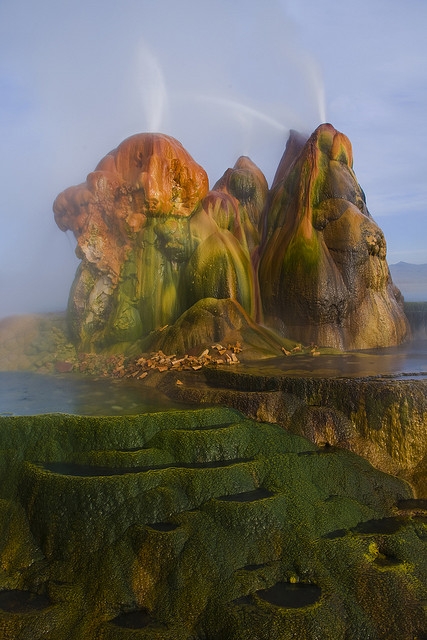 Marieta Islands are archipelagos formed as a result of volcanic activity. This natural wonder possesses its unique marine ecosystem. Humpback whale, sea turtles and dolphins are just a few animals  you can encounter here. 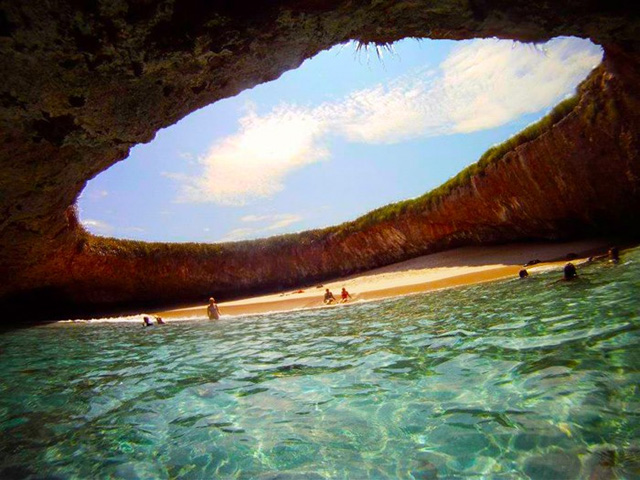 Socotra is considered to be a unique archipelago in the Indian Ocean for the diversity of its exotic flora and fauna. Its weird alien plants are the result of island’s long geological isolation together with unbearable heat and drought. One of the most unusual Socotra’s plants is the dragon’s blood tree, resembling a strange umbrella. Aboriginals believed its red sap to be the blood of a dragon. 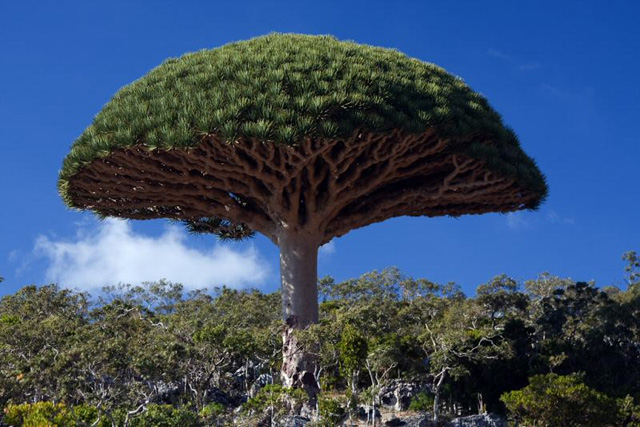 This is a enormous complex of temples in Cambodia, and what makes it so special are those giant trees living just above the temples. 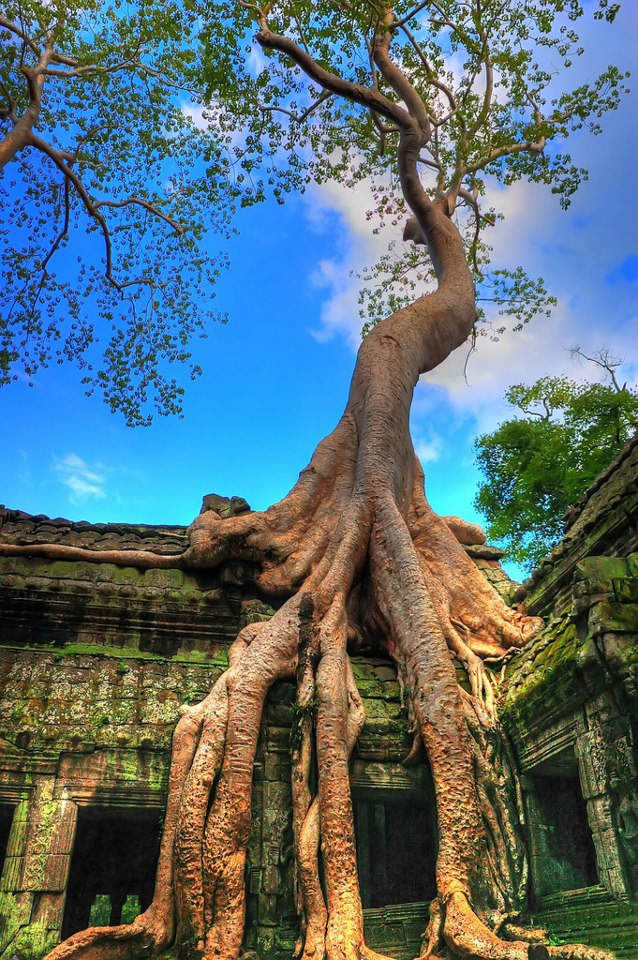 Have you ever seen anything like that? Chand Baori is a famous stepwell in the village of Abhaneri near Jaipur in the Indian state of Rajasthan. It is located opposite Harshat Mata Temple and was constructed in 800 CE. 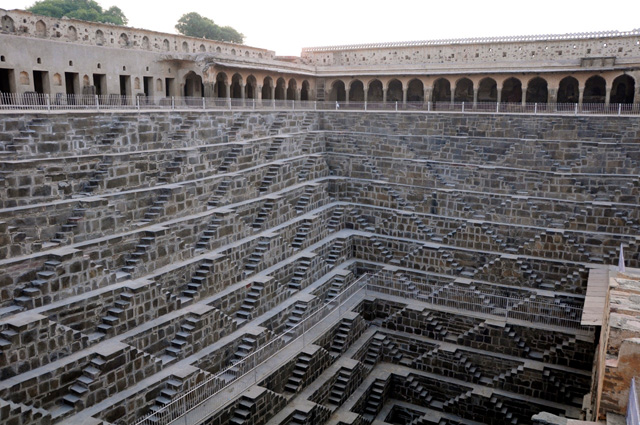 Pamukkale, meaning “cotton castle” in Turkish, is a natural site in Denizli Province in southwestern Turkey. The city contains hot springs and travertines, terraces of carbonate minerals left by the flowing water. It is located in Turkey’s Inner Aegean region, in the River Menderes valley, which has a temperate climate for most of the year. 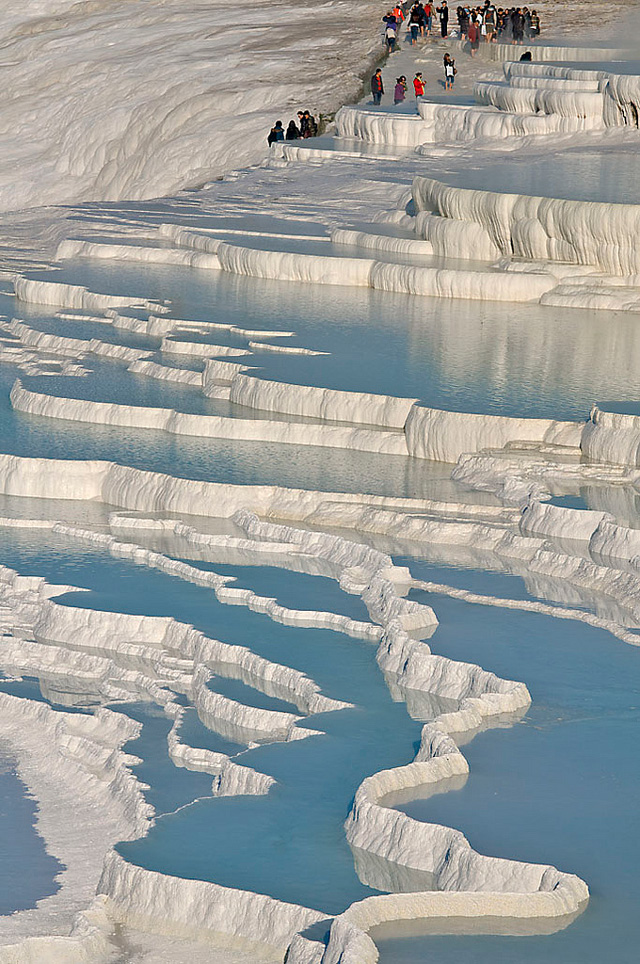 Sossusvlei s a salt and clay pan surrounded by high red dunes, located in the southern part of the Namib Desert. 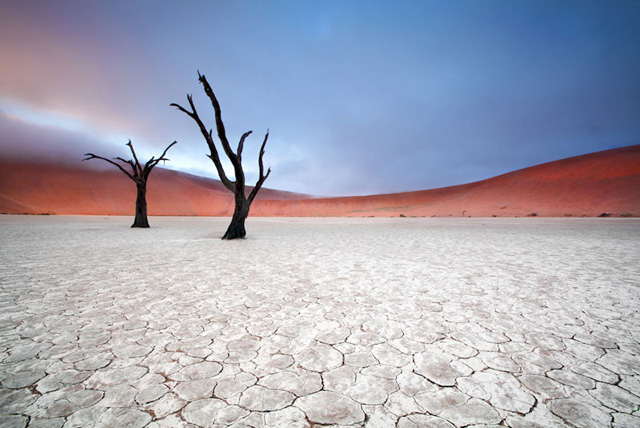 Also known as “Door to hell”. The Derweze area is rich in natural gas. While drilling in 1971, Soviet geologists tapped into a cavern filled with natural gas. The ground beneath the drilling rig collapsed, leaving a large hole with a diameter of 70 metres (230 ft). 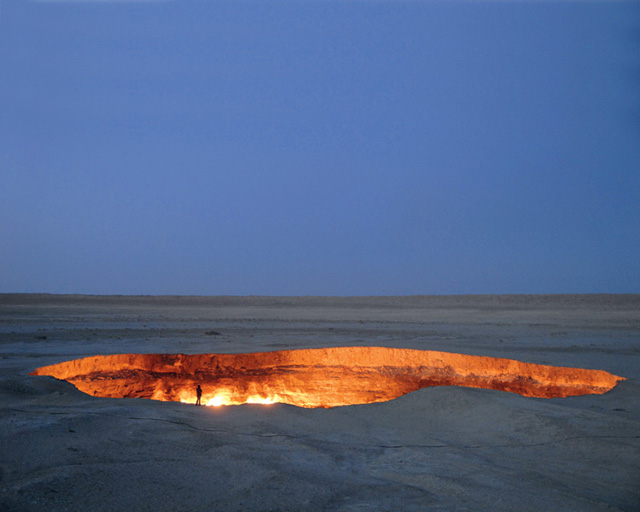 This is a natural site in Mazandaran Province in northern Iran, 95 kilometres (59 mi) south of the city of Sari, and 7 kilometres (4.3 mi) west of Orost village. It comprises a range of stepped travertine terrace formations that has been created over thousands of years as flowing water from two mineral hot springs cooled and deposited carbonate minerals on the mountainside. 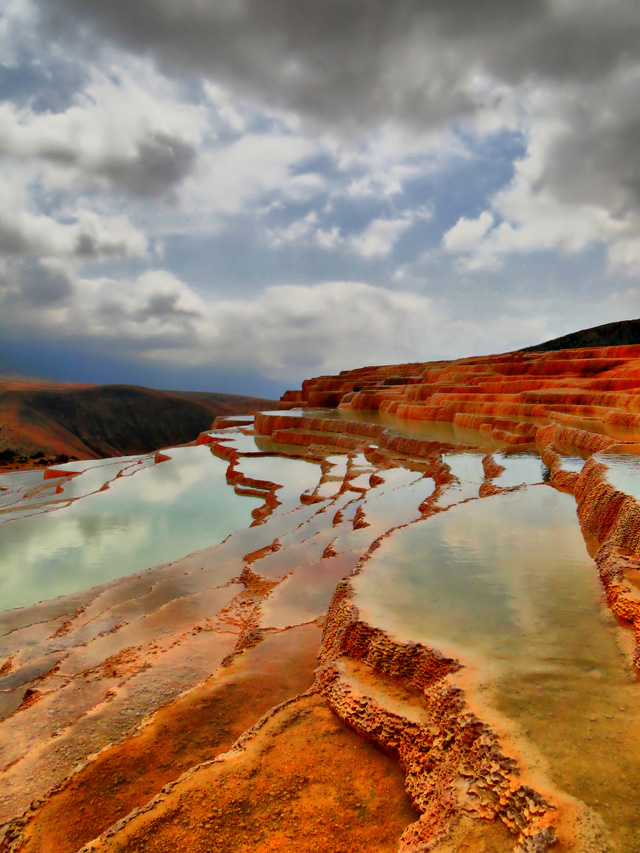 This cave in the glacier appeared as a result of glacial mill. The rain and melt water on the glacier’s surface are forming streams that flow into the crevices. The streams melt holes in the glacier forming long ice caves with intricate walls and ceilings. Cold wind finishes the job and we can observe a momentary marvel ready to collapse at any time. 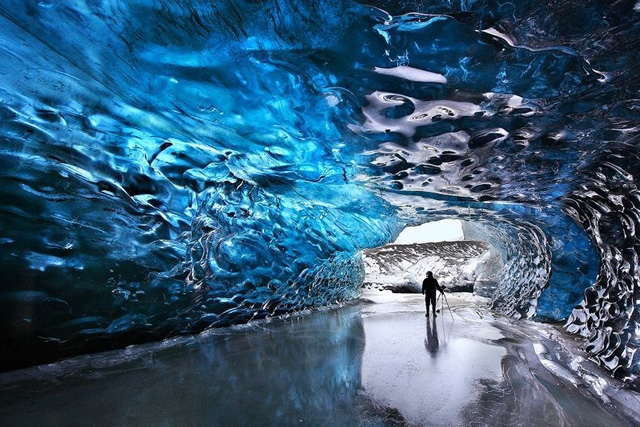 What you are seeing below is not desert. These incredible formations are just sand dunes with water (accumulated during the rain season) in between. 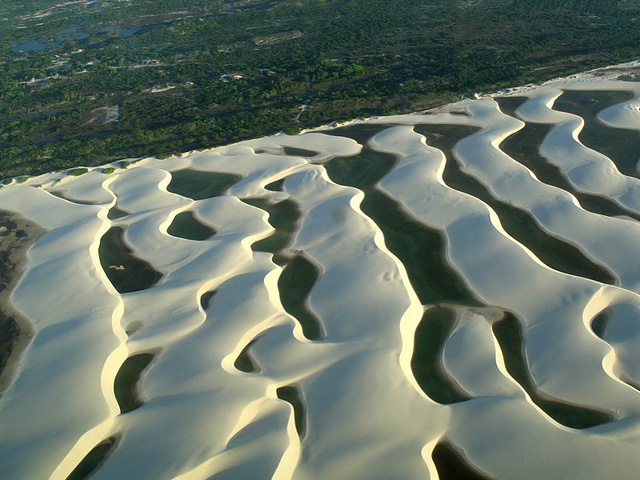 The glow worm, Arachnocampa luminosa, is unique to New Zealand. Thousands of these tiny creatures radiate their unmistakable luminescent light as our expert guides provide informative commentary on the Caves’ historical and geological significance. 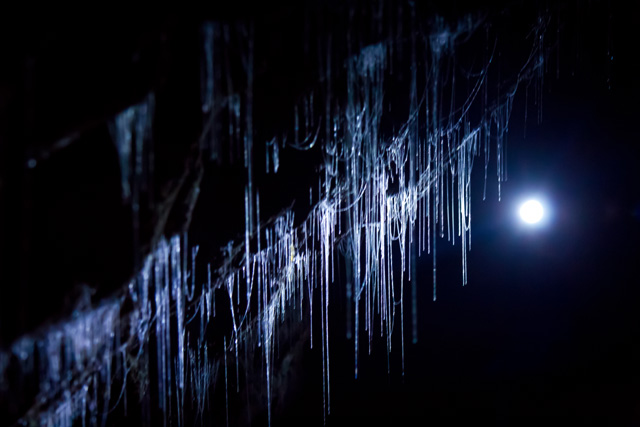 Glen Brittle is a large glen in the south of the Isle of Skye, in Scotland. It runs roughly south to north, along the River Brittle, which has its mouth at Loch Brittle (a sea loch). The glen is also overlooked from the east by the formidable Cuillin, the largest mountains on Skye. Many tributaries of the Brittle run down from these mountains into the glen, including a stream with waterfalls known as the Fairy Pools, a popular place to go for a walk. Because of its location by the peaks, the area is popular with hikers and mountain bikers. 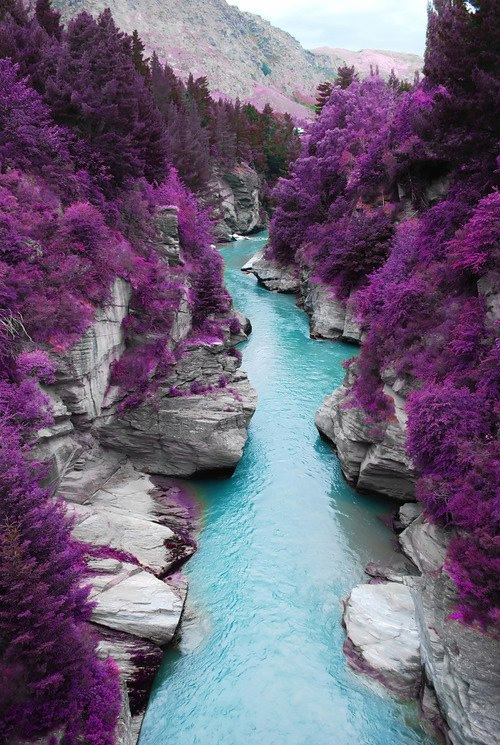 Caño Cristales is a Colombian river located in the Serrania de la Macarena, province of Meta. The river is commonly called “The River of Five Colors,” “The Liquid Rainbow” or even ” The Most Beautiful River in the World” due to its striking colors like yellow, green, blue, black, and especially the red of the Macarenia clavigera (Podostemaceae) at the bottom of the river giving it a unique appearance. 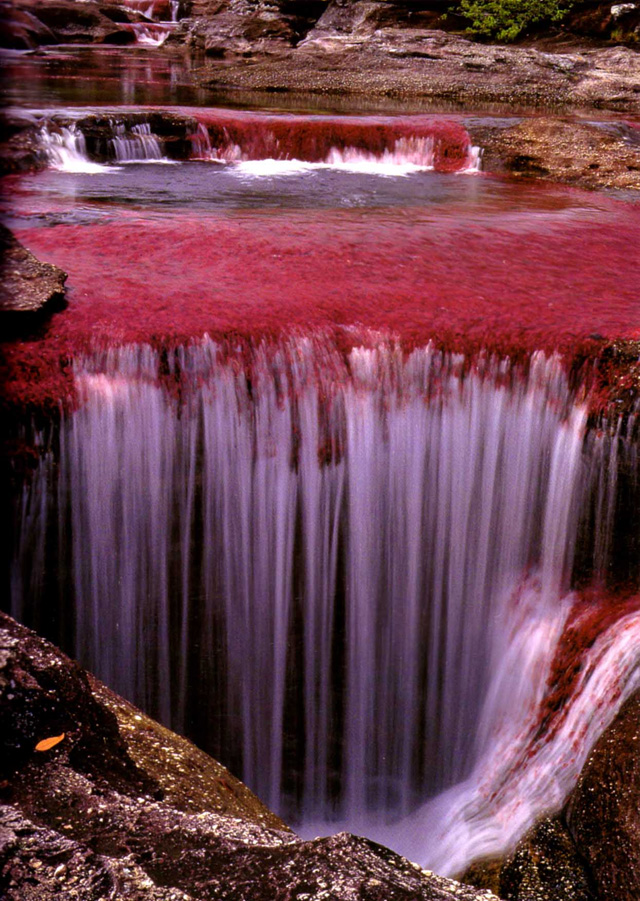 The Tunnel of Love, Ukraine

One of the most beautiful tunnels in world can be found near the city of Klevan in Ukraine – The Tunnel of Love. This is in fact a train tunnel of trees. It’s the main attraction in the area and also one of the most romantic places in the world. This amazing place is very popular among the lovers. They travel and come here in order to kiss and make a wish. It is believed that if the love is sincere their wish will come true. Everybody who visits the place says that this is the most beautiful in Ukraine. 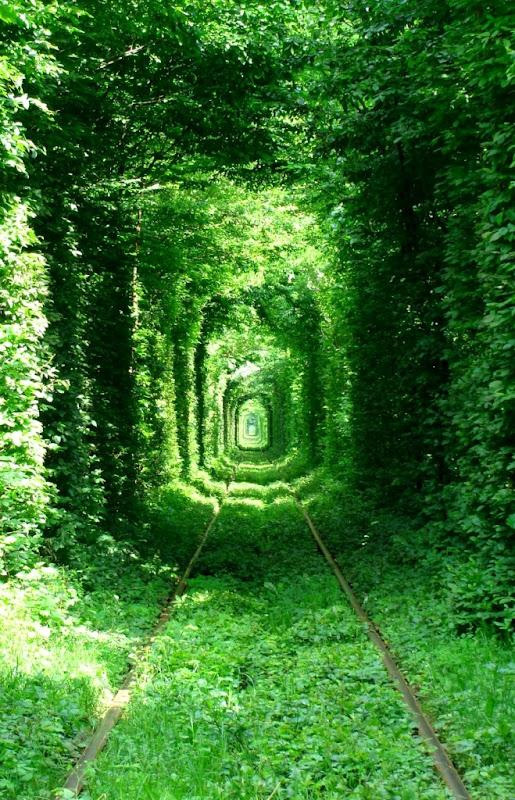 Its incredible hue is given by the pigmented bacteria. They form microbial mats around the edge of the water. Seasonal temperatures as well as levels of chlorophyll and carotenoids greatly influence the tint of the bacteria. The mats do not form in the center of the spring because the water is too hot for bacterium’s life. 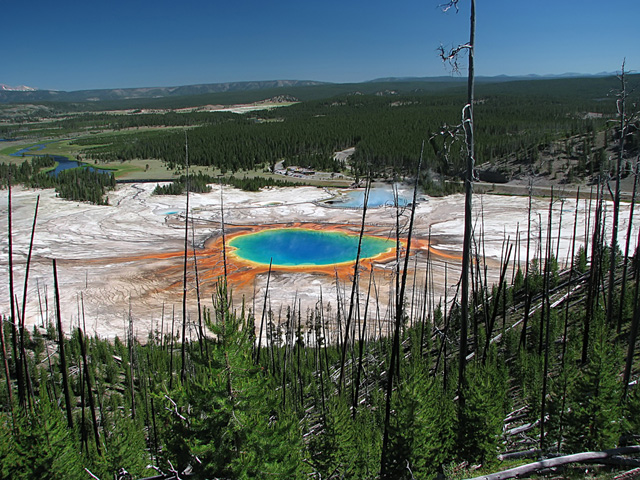 The Richat Structure, also known as the Eye of the Sahara and Guelb er Richat, is a prominent circular feature in the Sahara desert of west–central Mauritania near Ouadane. This structure is a deeplyeroded, slightly elliptical, 40 km in diameter, dome. The sedimentary rock exposed in this dome ranges in age from Late Proterozoic within the center of the dome to Ordovician sandstone around its edges. The sedimentary rocks comprising this structure dip outward at 10°–20°. Differential erosion of resistant layers of quartzite has created high-relief circular cuestas. Its center consists of a siliceousbreccia covering an area that is at least 3 km in diameter. 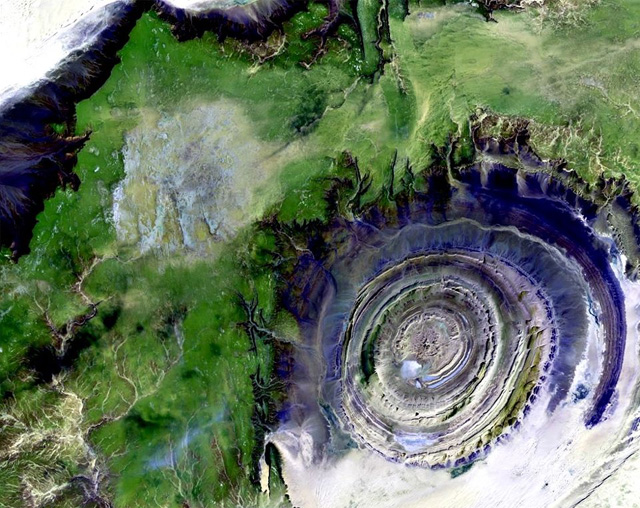