A kitty named Perdita was rescued by an animal shelter in North Carolina after the passing of her owner.

The cat was four years old, healthy and beautiful and on first glance, it seemed like she would not have any trouble finding a new home.

However, soon after arriving at Mitchell County Animal Rescue she was revealed to have a… fiery temperament.

Perdita, as it turns out, was not the type to hold her tongue when someone annoyed her.

Rather, she was quite fond of using her claws to express her displeasure.

The shelter staff knew that most people are no to keen on adopting a mean, unfriendly cat, but they still had to find her a home somehow.

So, they decided to lean into it and hope for the best. 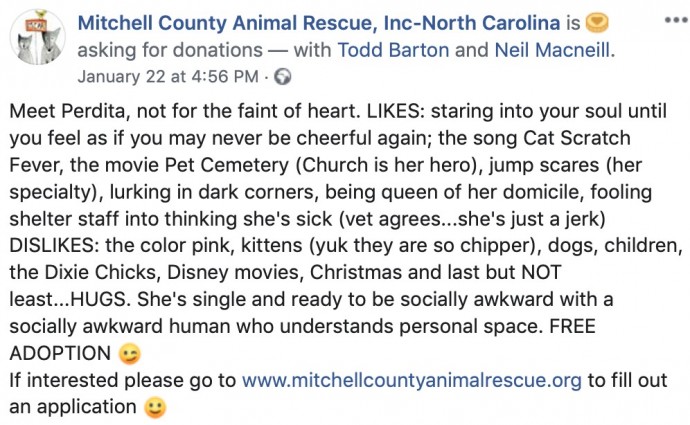 The shelter lay all their cards on the table and did not mince their words when describing the callous kitty.

To somewhat sweeten the deal they emphasized that whoever was brave enough to adopt Perdita would not have to pay for the (dis)pleasure of becoming her new family.

This honest and direct approach to finding Perdita a family turned out to be a huge success.

Apparently there’s plenty of people who do not balk at the idea of sharing their home with an angry little ball of fur.

In fact, an overwhelming amount of people felt compassion for Perdita and wanted to make sure that her difficult personality did not rob her of the chance to find a good home.

After all, even the grumpiest of cats deserve a safe and loving home.

Perdita wasn’t terribly impressed about her new fame, but apparently accepted a few headscratchers while the applications continued to pour in.

That’s the thing about Perdita – she’s not against affection, she just needs it to be completely on her terms.

After a while, the shelter had got so many applications for Perdita that they had to stop accepting new inquiries

People were amazingly passionate about making sure that Perdita’s grumpiness wouldn’t leave her homeless. 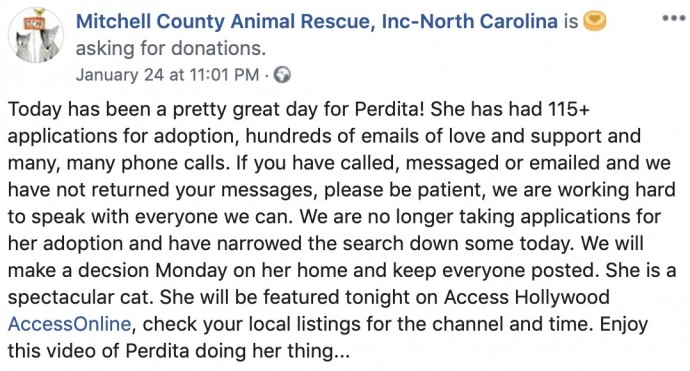 Perdita even got so famous that Access Hollywood decided to feature her, though we assume that didn’t impress her much.

But her story has touched many people, and the shelter has received many comments on their posts about Perdita from people who’ve known and loved “difficult” cats just like her.

It just goes to show that there is someone out there for everyone, even if it doesn’t always feel that way.

In the end, it’s all about honesty and finding the right person.

It’s heartwarming to know that even the grumpiest of cats can inspire love in so many people.

Even if Perdita can come across as unfriendly, she’s still deserving of love and safety and now, thanks to Mitchell County Animal Rescue, that’s exactly what she’ll get.

Update: Perdita finally found a forever home and her new name is Noel 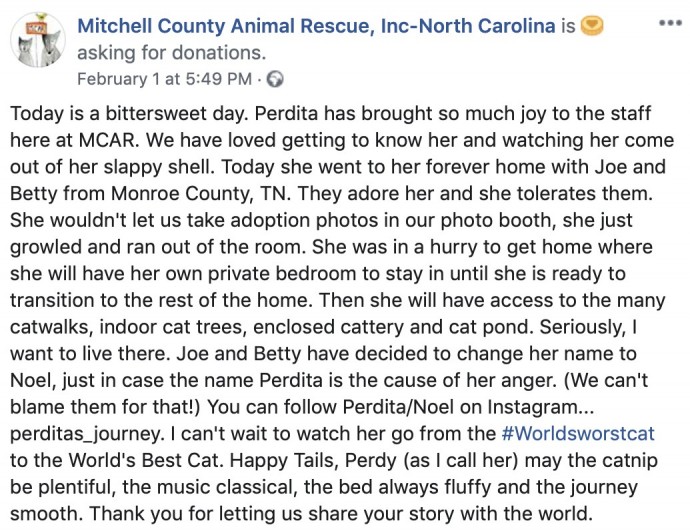