This poor dog was beginning to doubt himself after he kept being rejected and passed over for adoption, but decided to prove himself, and everyone else, wrong.

Rush is a sweet and gentle pit bull who’s spent his whole life without a family to call his own.

It’s been hard on the pup to spend his life homeless and alone, but when he was taken in by the SICSA Pet Adoption Center it looked like he would finally be able to find a family.

Rush was so sweet and kind and he knew he was a good boy – surely he would get adopted in no time. 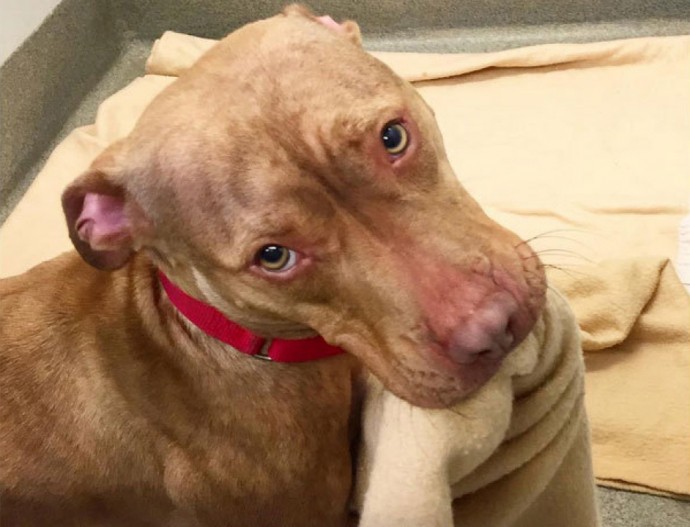 But Rush soon found that it wasn’t that easy.

Dog after dog got adopted, but Rush never got picked.

Because he’s a pit bull, many people assume he’s a “bad dog”. They think he’s dangerous and aggressive, even though everyone who’s spent some time with him knows how wrong that is.

But when everyone sees you as a bad dog, it can be difficult to remember who you really are.

But Rush decided to not give up.

He decided that he was going to prove to everyone that he was a good boy and worthy of adoption.

So, one day, just before potential adoptive parents would be visiting the shelter, Rush made his own bed.

Volunteers at the rescue saw him carefully tuck his sheet around his bed to make it look nice and presentable.

And this adorable display soon proved to not be a one-time occurrence; Rush kept making his bed each day in the hopes that someone would realize his worth.

The shelter shared a video of Rush’s bed-making routine in order to help him get his message across, and soon after, Rush found his forever home.

A wonderful family saw Rush for who he really is: a kind, affectionate little guy who just wants to love and be loved.

Rush has waited a lifetime for a family to call his own, and he has finally found it.

He’s finally loved, safe and happy, and his future is bright and filled with possibility.

Rush’s story has touched many hearts, and everyone is so happy and proud of him.