At four years old, it looked like Bentley’s life was never going to get better. The poor bloodhound was living in a shelter, and nobody thought he’d ever find a forever home.

He’d already been adopted four times, only to be returned to the shelter each time.

Bentley was considered to be aggressive, untrusting, and destructive. Nobody had enough patience to care for him.

But then, he met KaTarra Taylor. 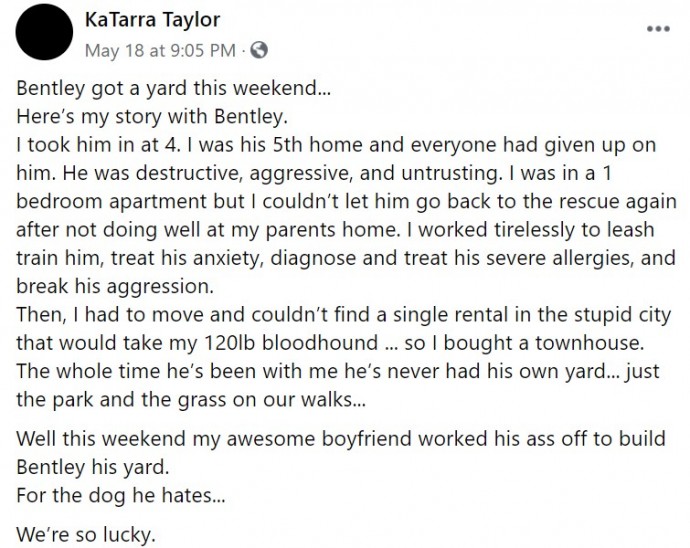 Taylor wasn’t planning on adopting a dog, but the universe had a different plan for her.

Her parents adopted a bloodhound but soon found that he did not thrive in their home.

Since Bentley wasn’t doing well in Taylor’s parents’ home, it seemed like he would have to return to the shelter for the fifth time.

But Taylor couldn’t stand the thought of the poor dog returning to the shelter.

Despite living in a small, one-bedroom apartment, Taylor decided to bring Bentley home with her.

The despondent bloodhound suffered from issues with anxiety and aggression and also proved to have a number of undiagnosed allergies.

But Taylor was ready to work hard to help Bentley turn his life around.

She treated his allergies, patiently helped him improve his confidence and overall mental health, and addressed his aggressive tendencies.

It was an intense but incredibly worthwhile process, and Taylor was thrilled to see Bentley grow and blossom.

But though Bentley was thriving under Taylor’s loving care, they soon ran into a new problem.

When Taylor had to move, she found that it was nearly impossible to find an apartment.

It seemed like no landlord was ready to rent an apartment to her as long as Bentley was living with her.

Obviously, there was no way she was abandoning Bentley, so Taylor had to figure something else out.

And so, Taylor ended up buying a townhouse for her and Bentley so that they could stay together.

Now, Bentley and Taylor had much more space, and the new house even had a little patio.

But Taylor, knowing how much Bentley loved grass, had something even better in mind.

Whenever they were out on their walks, Bentley loved to lounge in the grass, so Taylor wanted him to have easy access to a nice, comforting stretch of grass.

Therefore, with the help of her boyfriend, Taylor transformed  the concrete patio into a small, grassy yard.

When Bentley was presented with the new yard, he was overjoyed and immediately laid down on the grass.

“Bentley immediately laid down and just stayed there for several hours. He seems so happy with it,” Taylor told The Dodo.

Bentley could never have imagined that he would one day live in a beautiful home, with a loving mommy and his very own yard, but Taylor made it all happen.

Now, because she refused to give up on him, Bentley’s life is filled with love and he can finally feel safe and happy.