Akela is a sweet pup who recently found herself in a tough spot.

The boxer mastiff mix was out and about when she almost got hit by a car.

Akela made a narrow escape but as she fled from the road she ended up getting stuck in the nearby pond instead.

Poor Akela tried to swim to shore but could not get out of the muddy waters.

With nothing else left to do, Akela had to tread water and hope that someone would come to her aid.

A local resident had seen Akela avoid getting hit by the car only to find herself stuck in the pond.

The concerned person called for help, and the Washington Township Police Department soon arrived at the scene. 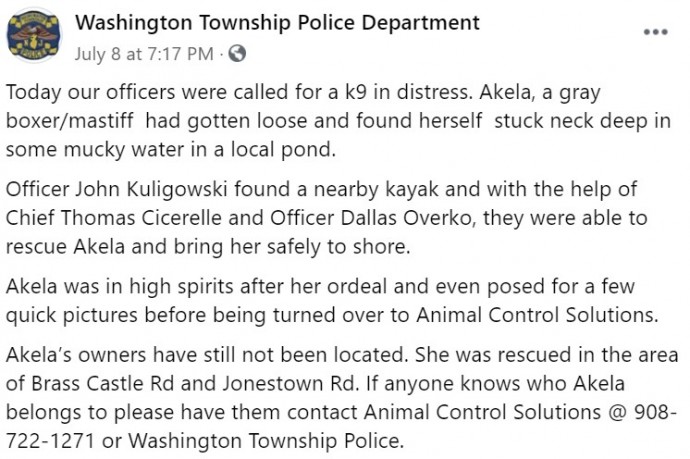 The police saw Akela desperately treading water in the muddy pond and struggling to keep her head above the water.

A few times, she dipped under the surface before getting her head back out of the muddy waters.

One of the officers, John Kuligowski, managed to borrow a kayak and used it to begin the rescue mission.

Kuligowski paddled up to Akela and then, after trying and failing to get her into the kayak, settled for getting Akela unstuck and leading her back to shore.

Once she got her feet back on solid ground, Akela perked up.

She did not seem to have suffered any injuries and just seemed happy to finally be back on land.

Now, the police are helping Akela find her family and are making sure that the sweet pup feels safe and happy.

We’re all so relieved that sweet Akela is safe and sound.