A dashingly photogenic kitty has gone viral after two pictures of him “smiling” were turned into a popular meme.

In the pictures, the kitty is seen smiling gleefully as if he just told a joke that is so bad it’s good.

The pictures were originally posted on Reddit, and people quickly fell in love with the happy kitten and left many humorous comments and jokes on the post. 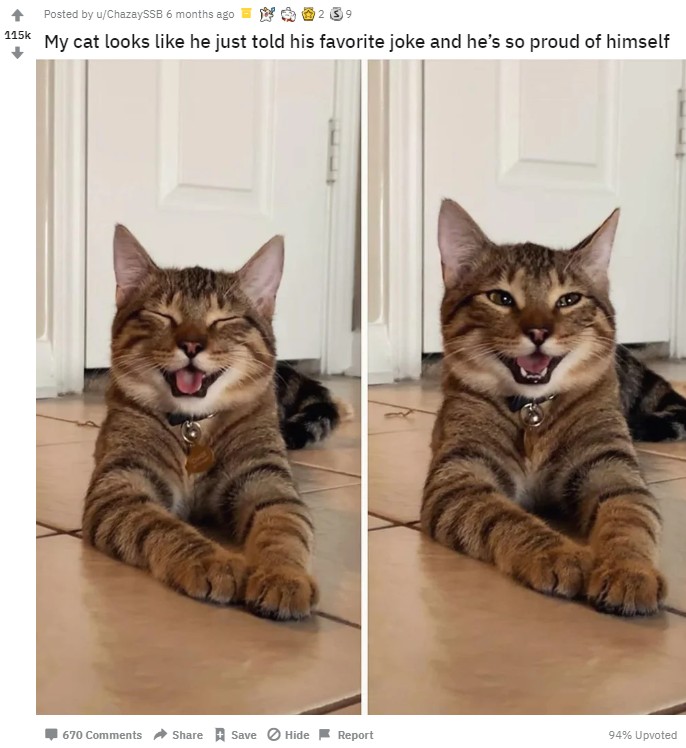 And some people took it one step further and began creating their own “dad joke” memes with the pics as a template.

READ ALSO:
Photographer Takes Pictures Of Huge Dogs Playing With Their Tiny Toddler Friends, And These Are 23 Of His Best Photos

The kitty behind the popular meme is named Chestnut, and he has his own Instagram where he shares snapshots from his life with his many followers.

Thanks to the meme, Chestnut has amassed over 23 thousand followers – not bad for a little kitty!

His adorable little face and wonderfully meme-able expression quickly garnered him many fans.

Now, many people just know him as the “dad joke” cat.

And he’s such a little charmer!

His gleeful smile perfectly expresses the joy you feel when you unleash a really bad pun on an unsuspecting friend.

We’ve all smiled like that while our friends have groaned and complained.

And we’ve all been on the receiving end, too. Boo!!

Though Chestnut really makes us want to say “aww” instead of “ugh”.

Because when you’re this cute, you can get away with almost anything. Even puns!

Chestnut is really bringing out the humour and creativity in people.

And he looks good doin’ it!