A sign someone stuck to a light pole in Toronto, Ontario, is going viral on various social networks.
The sign, according to Reddit user whatsmystation, was written by a desperate woman who recently had to put her rescue dog down due to cancer, and it’s addressed to the thief that robbed her of the camera that had photos of her dog’s last day alive on it.
In the note, the woman begs the thief to give her the memory card back, even stating that he can keep the camera and the cash if he wants, but she just can’t lose the last photos of her beloved dog.
The message went viral both on Facebook and Reddit, and the entire internet is now trying to spread the word, hoping the thief could see the message and at least return the memory card. The chances are low, but seeing the way the web is coming together to help a grieving woman is definitely heartwarming.

This is the message the woman stuck on a light pole in Toronto, Ontario. 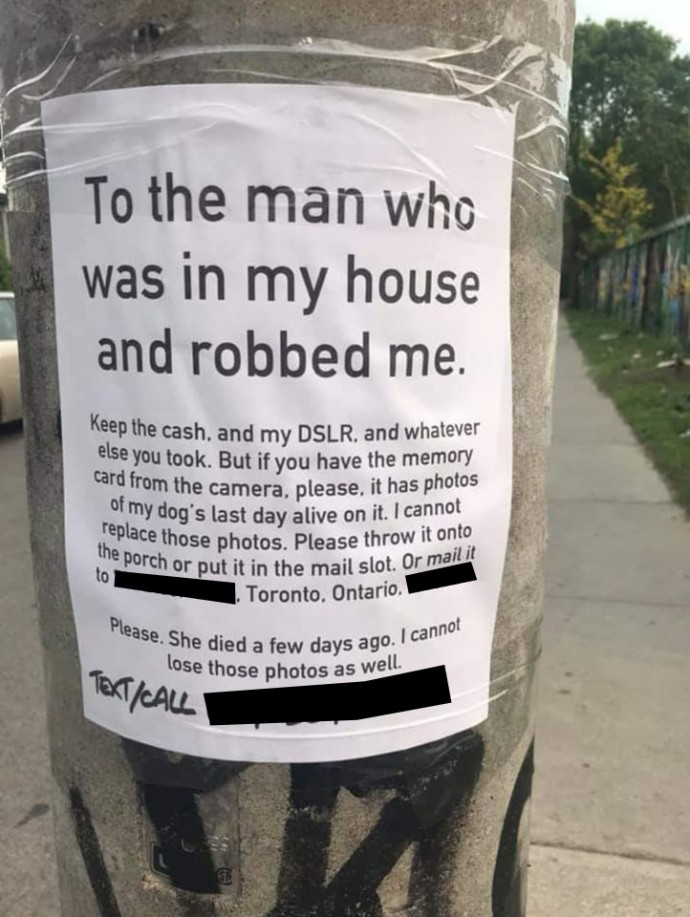 A Reddit user claimed to know the woman who posted it. An amazing woman who gives so much to the Toronto community, he said.

Many people were moved by the heartbreaking note.

Some invited people to backup the most valuable photos, although we all are too lazy to do it most of the time.

Some where just outraged by the theft.

Some people went through the same struggle of losing a pet and know the value of those last pictures of their beloved furry friends.

But after all, everyone just hopes the thief has a scrap of decency and returns at least the memory card.