Marshall Butler is a sweet 3-year-old boy who lives in Florida with his family.

The family has two dogs, Buckwheat and Nala, and they love their little human sibling; there’s nothing they wouldn’t do for Marshall, and they recently showed proof of his this when Marshall ended up getting lost in the wilderness. 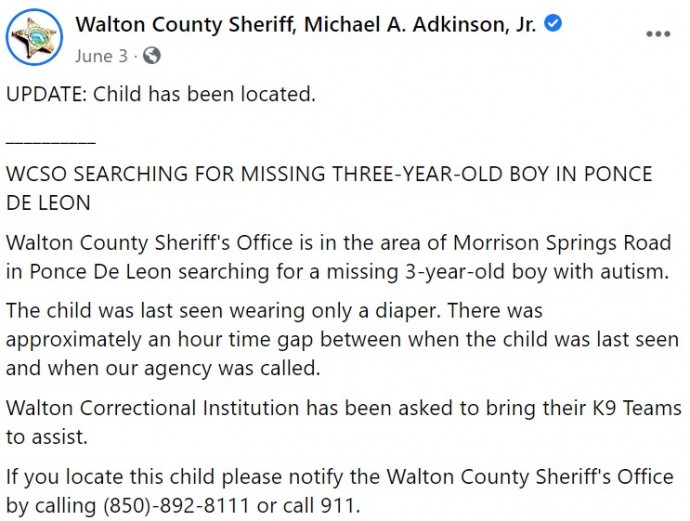 Marshall, who is autistic and non-verbal, was playing with the two pups in the backyard of his Ponce de Leon home.

Marshall was enjoying himself but soon decided that he was craving some adventure.

And so the little toddler left the safety or the yard and headed out into the neighbourhood.

Marshall was only dressed in a diaper but didn’t let this stop him as he headed off to explore the area.

Meanwhile, his parents discovered that their little boy was missing, and were understandably panicked.

Then, they noticed that their two pups had also gone missing.

Nala and Buckwheat had realized that they could not let Marshall leave alone, and so the two pups had followed the toddler in order to keep him safe.

Both the authorities and concerned neighbours quickly began looking for the sweet little boy, and a search team with search and rescue dogs was put together.

But despite all of this, hours passed without anyone finding any trace of Marshall, Buckwheat and Nala.

But just as things were beginning to look hopeless, Marshall was spotted wandering by the woods.

The toddler was covered in dirt and mud from his adventure in the wild, but it soon became clear that Nala and Buckwheat had done an amazing job of keeping him safe.

Despite being lost for hours, Marshall did not have any injuries and the pups had managed to keep him away from the nearby river.

Now, Marshall is home safe, and his parents are so grateful to everyone who helped look for him, and to Nala and Buckwheat for keeping him safe.

Marshall is lucky to be loved by such loyal and affectionate pups, and we’re sure Buckwheat and Nala are grateful to have such a sweet little boy in their lives.

We’re all so relieved everything ended well.