It’s May and one of its highlights is the very special day dedicated to our dear mothers. In line with that, a new internet craze was lit over Twitter in form of a hilarious meme. It was Twitter user @daviddeweil who started it all by asking the internet to name three of their mom’s album in expression of their love for their moms. The internet on the other hand, being as eccentric and cooperative as ever, responded in brilliant ways. “There’s food at home”, “When I’m dead you’ll realize”, and “You don’t pay no damn bills in this house”, are just a few of the best albums ever tweeted back by other Twitter users. We bet you already found a common ground with these example and believe us, you wont regret scrolling through all of them below.
(h/t: buzzfeed)

It was just in time for Mother’s Day when this meme came to existence.

1. What made it even more hilarious are these awesome responses.

4. Albums are even spiced up by platinum awards and remix versions. 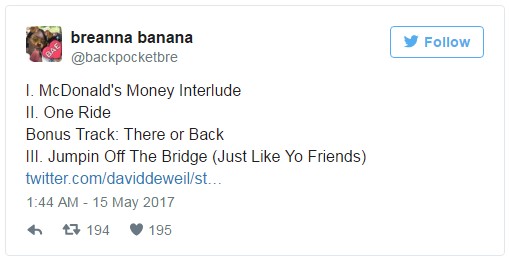 7. But of course, “There’s food at home”, will always be a classic.

10. And the rest are just equally relatable and funny as heck.

All thanks to our lovely mothers who inspired this hilarious event.