A sealed cardboard box was found at the Puntzi Lake Landfill in British Columbia, Canada, with a dog and her nine newborn puppies inside.

Someone abandoned this dog and sealed them inside the box to make sure they couldn’t get out. However, a kindhearted person found the dogs and immediately took them to the vet.

At the time, the mother dog was incredibly thin and malnourished. Seemingly, she gave birth a week before they were found. Despite her poor health, she continued to care for and feed her puppies.

After staying at the vet overnight, the family was then transferred to a non-profit organization called the British Columbia Society for the Prevention of Cruelty to Animals (BC SPCA). The BC SPCA is dedicated to protecting abused animals and actively fights against animal cruelty.

At the BCSCPA’s Quesnel and District branch in Canada, the mother dog focused on taking care of her puppies while the staff fed her and nursed her back to health. At first, she was nervous. Perhaps, her anxiety was due to her past traumatic experiences, but after some time, she let down her guard.

Eventually, the shelter named the mother dog “Casey.” She is a lovely dog who is friendly with everyone at the shelter. Today, the shelter staff is relieved that Casey and her puppies were found by someone who took action.

Currently, Casey’s puppies are growing up. They will be available for adoption when they are at least two months old. Until then, Casey and her puppies are staying at the same shelter. 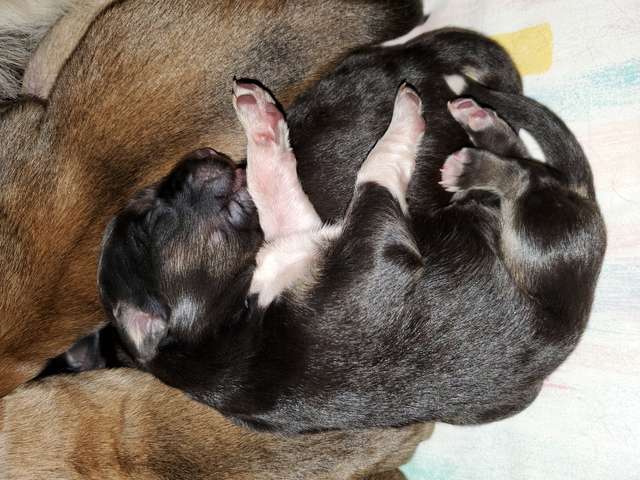 Today, the BC SPCA is still looking for the person who abandoned Casey and her puppies. Further, the BC SPCA reminds the public not to abandon their animals because it is an incredibly cruel, illegal act. If a pet owner is struggling to take care of their animals, he should reach out to their local rescue or animal shelter instead of abandoning them.