Some pet parents claim that when they get sick, their furbabies can tell they’re ill and will even try to comfort them.

However, not many people are reporting that random animals come rushing to their aid when they’re feeling under the weather.

This man, however, made a new friend while recovering from surgery when an unknown cat decided that he needed some love and comfort.

Andrew Falloon tweeted about the hilarious surprise his father got after waking up from a nap.

Falloon’s dad had recently undergone surgery and needed a lot of rest. One day, Falloon’s mother left the house to run some errands while the dad snoozed on the couch.

When she returned, the dad was still sleeping on the couch, but he was no longer alone: a cat was snuggled up on top of him and had its paw gently resting in his hand.

This came as quite a surprise to her, and to the dad once he woke up, since they did not own a cat.

The cat, later revealed to be named Ziggy, lives in the Falloon family’s neighbourhood and must have just thought that Falloon’s dad needed some purrfessional medical attention; nothing is quite as restoring as a cat’s soft purr, after all.

Falloon’s sweet and funny tweet has been widely shared and people are in love with the caring little kitty.

Some people can barely handle the cuteness of the situation… 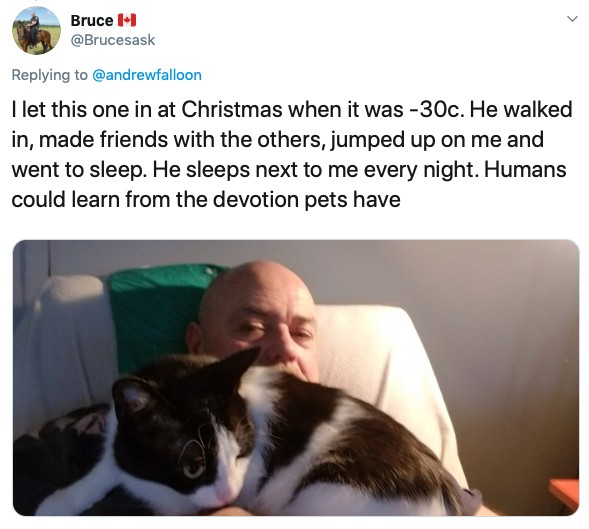 Everyone can agree that it’s a beautiful situation and that cats are wonderful.