Kareem Garibaldi, an officer with the Lakeland Police Department in Florida, was patrolling the city early one Saturday morning when he almost hit a little puppy with his car.

The little boxer/pitbull mix only looked to be about 8 weeks old but was running around the street all alone, without any type of identification, and it was only a matter of time before someone would accidentally hit her.

Garibaldi knew he had to save her and quickly got out of his car, scooped up the adorable puppy, and brought her back to the station.

Then, after finishing his shift, he brought the puppy back home with him.

Garibaldi hoped that the puppy had an owner somewhere to be reunited with, but since the puppy had no collar, chip or any other type of identification, it wouldn’t be easy to track them down.

But Garibaldi did his best. He travelled up and down the neighbourhood the puppy had been found in, looking for anyone who was missing her. Garibaldi also posted pictures of the puppy on social media in hopes of someone recognizing the little pup.

However, despite his best efforts, Garibaldi came up empty-handed.

It appeared as if the little puppy was a stray and all alone in this world.

Except, she wasn’t alone anymore. Now, the puppy had Garibaldi by his side, and the kind police officer was ready to go the extra mile for the little pup.

Straight after finishing his third 12-hour shift in a row, Garibaldi brought the puppy to the SPCA Florida Medical Center to get it examined.

Garibaldi was exhausted after his long and strenuous shift, but the puppy’s needs came first.

When Connie Johnson, the shelter’s safety net manager, arrived at work, she found Garibaldi and the puppy sleeping side by side.

Garibaldi had sat patiently in the waiting-room from 8:45 am to 12:00 p.m while the puppy was being examined by the vet. While he waited, the exhausted officer took the chance to rest his eyes for a bit.

When the puppy had been examined, it was clear that she was going to be okay; she had some mites but was otherwise healthy.

When she returned from her exam, Garibaldi woke up and made sure she was alright. Then, the exhausted pair both fell asleep. 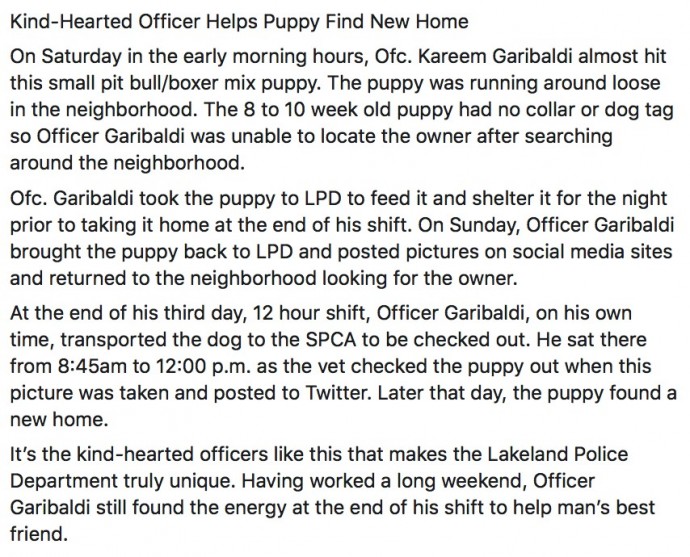 Johnson snapped a picture of the two and posted it online, commending Garibaldi for his kindness and selfishness.

After the check-up, Garibaldi brought the pup back with him to the police station.

There, a dispatcher spotted the little puppy and instantly fell in love with her and adopted her that very same day.

The puppy was named Hope, and thanks to Garibaldi, she now has a family who loves her and a safe and comfortable home.